I felt this little mini adventure deserved it’s own blog post because it’s important to document in full detail the final nail in the ‘CRAZY HUSBAND COFFIN” when it comes to catching trains.  I know it’s low hanging fruit to continue to pick on him but there is just so much crazy to share.

First the backstory because you bitches know how I like a good story of the posterior region.  So apparently getting from Venice to Munich, Germany isn’t “the super duper journey of ease, sunshine and joy” we may all think.  Who knew the Alps were so ~BARSTARD WELL BIG~ and hard to get over.  Around about this point in the trip planning/headscratching phase I royally forked up and stupidly listened to a so called friend who said “hey sexy mumma of awesomeness, why don’t you guys catch the OVERNIGHT SLEEPER TRAIN?”  This evil queen then suggested “it will be fun and really ROMANTIC”.  (please note I am now reversing the friend truck away from her ha).

At this point consider myself absent of all sanity and clearly into self harm of the mental variety because I decided this was a fan-freaking-gasmic idea.  Such stupidity has happened to the best of us am I right????…..WRONG.  TWATTING. WRONG!!!!

So an overnight train would combine travel ~awesome~ with hotel accom ~awesomer~ and no time would be lost getting to our next destination ~awesomest~.  Of course at this stage of the mother shitting rainbow I had not witnessed HUSBAND’S TRAIN BRAIN INSANE!!!!  (forever to be called TBI).

So we are in Venice and catch the Vaporetto “see previous tear stained post for details” and arrived at the train station with ample time which is as it should be because if you are early you are on time and if you are on time you are late….this is tattooed across my chest but the hair hides it.  So I suggest to husbo to pull up a pew, buy a brew, drink til we spew and do what all other loved up couples do – check Facey and Insta.

Husband insists on again standing and watching the Departure Screens waiting for our platform to be announced.  Look I’ll admit it’s been a little annoying up to this point with our other train trips but “insert DIRTY CUSS WORD here” you see…….our train is not leaving for another 1hr 15mins.  No I did not effffing stutter.  He wouldn’t let us wander around the station, look in the many shops, boozehound up, nuthin…..just had to stand there watching a screen for over an hour.

As my eyes nudged the back of my skull I had a few ways I could handle this.  My first instinct was to SCREAM “hon your crazy is showing – you better tuck that shit back in” but there was a chance that such a statement could turn into a situationship and we had a very long night ahead couped up in a tiny cell.  So like the saint of incredibleness that you all know I am, I just quietly swallowed the scream and stood watching and waiting. 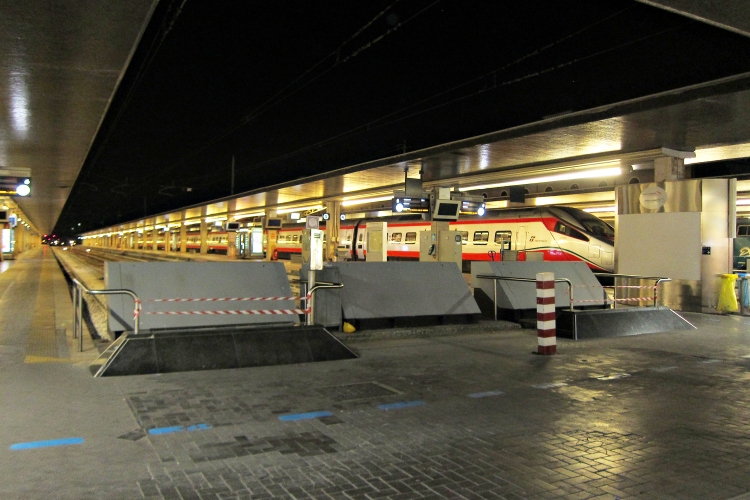 Finally after what seemed like more time than it took to create the earth – our platform was announced and of course then husband wanted to race to get on the train.  We had a private cabin booked and plenty of time however he does like to run at high speed with heavy suitcases and unfit wife trailing behind shouting obscenities so off we took……because, Olympics, medals to be won, etc…WTF!

~ Can I just say, my one complaint with the rail system in Europe is that all the way along we had booked first class seats, and the overnight cabin we booked was the most expensive option for the trip (it wasn’t cheap my friends).

So why-oh-frikfrakking-why are the first class seats/cabins the furthest away from the station???  Shouldn’t all of that extra money I handed over grant me some special treatment like half naked fireman carrying me on their shoulders and delivering me gently to my seat in a cloud of glitter???  Why do the commoners barely have to take a step to get to their chicken crates and I’m left running a half marathon, whilst the train pulls out and I have to tuck and roll through the door to get on.  Shouldn’t my extra-ness give me a guard of honour, a 21 gun salute and a gold encrusted conveyor belt to float me regally to my throne?

Anywayyyyy…..we find our cabin and look I wouldn’t say it was small because I don’t want to offend the cabin but it was on the petite side – but if I’m honest it was perfectly formed and had everything we would need for our overnight adventure.  I’m pretty glad we had spent extra to have our own cabin and bathroom because A. I don’t really like people so rubbing up against them in the “shared-shudder-cabins” is a big NO and B. I’m not sure how much sleep we would’ve gotten with me up and down wandering corridors with complete strangers trying to find a loo.  I grabbed the bottom bunk and made the height phobic hubster get up on the top bunk because well…..childbirth, he’s a dickhead, did I mention childbirth. 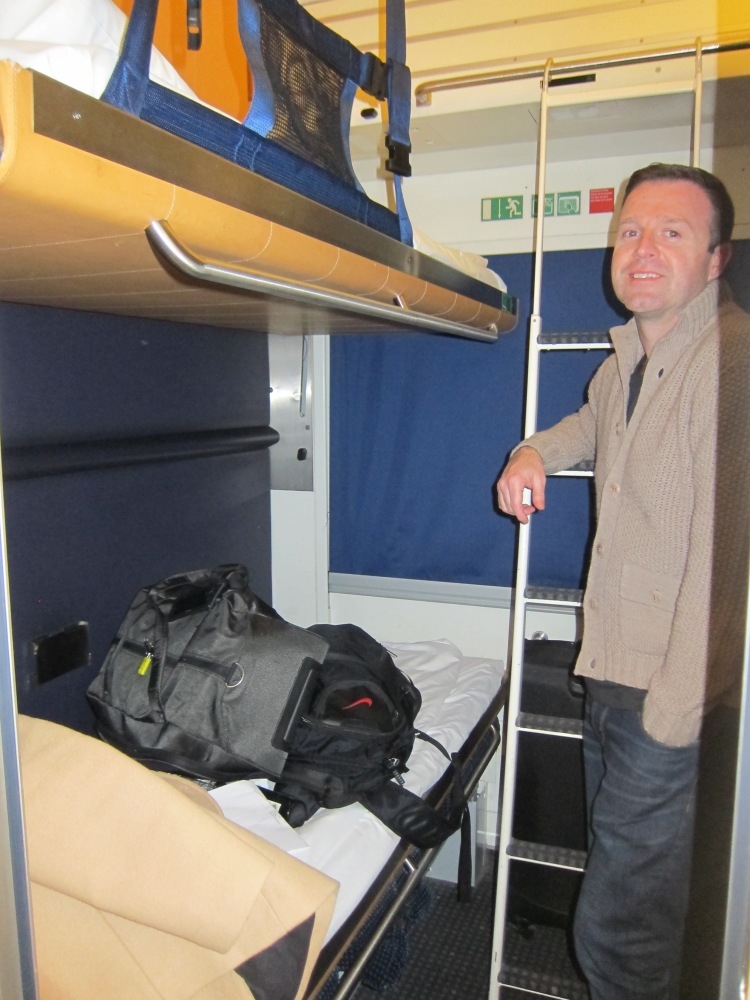 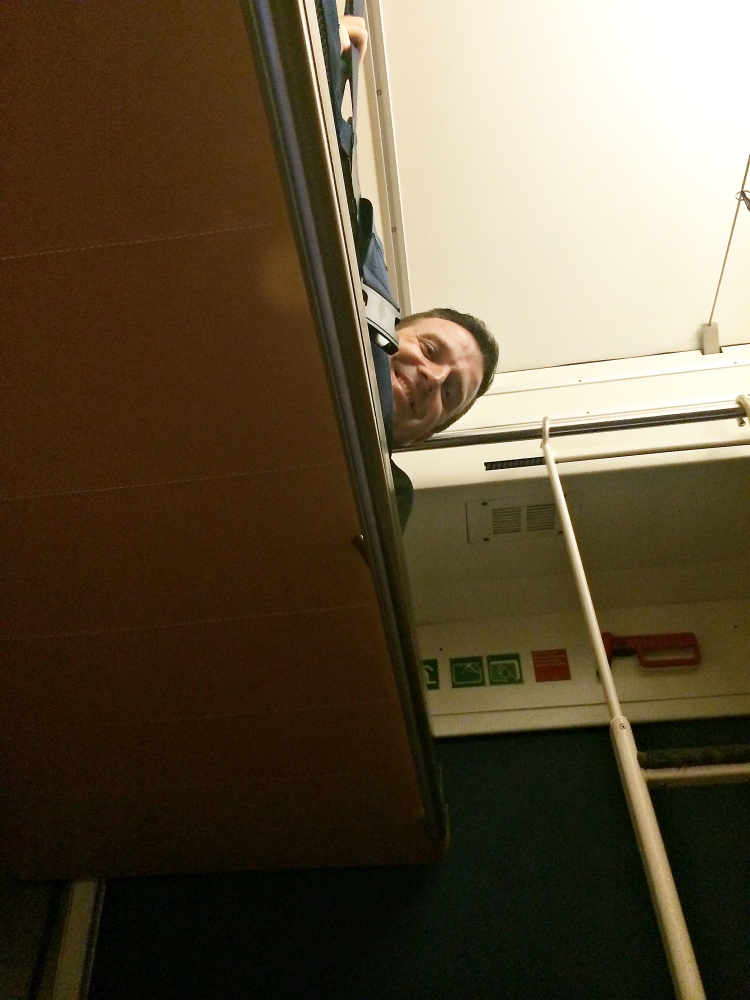 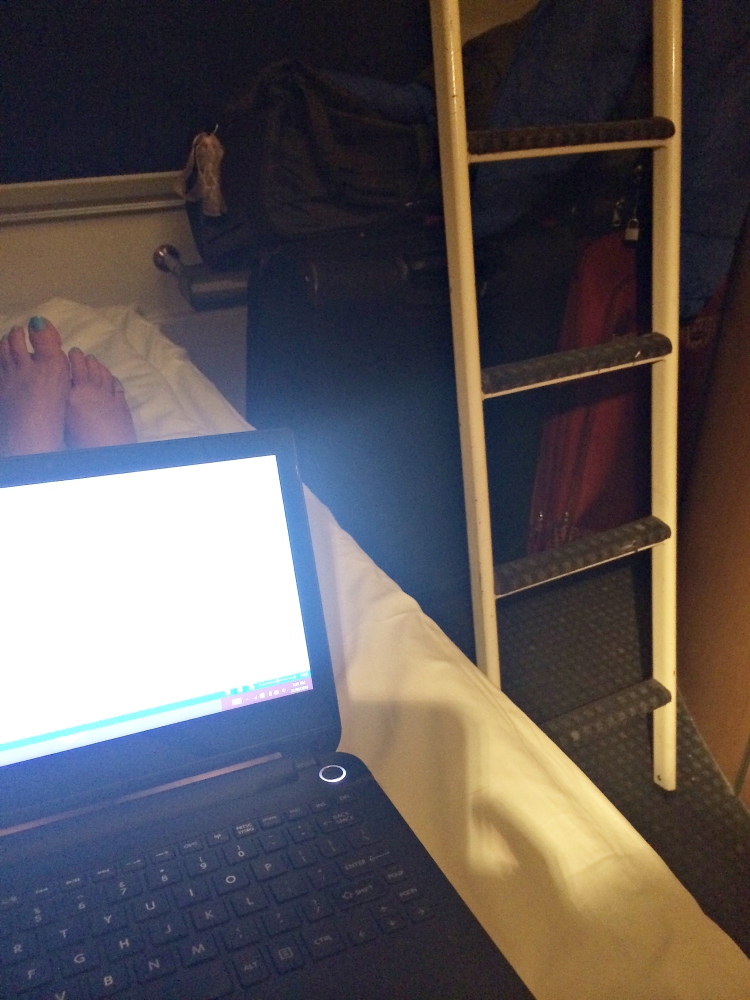 The bathroom took some manoeuvering.  I was, however, VERY impressed that I could sit on the shitter whilst brushing my teeth and showering – all at the same time.  What witchcraft is this?  It was a real time saver and we are thinking of having our bathrooms at home remodelled to reflect some of this wizardry! 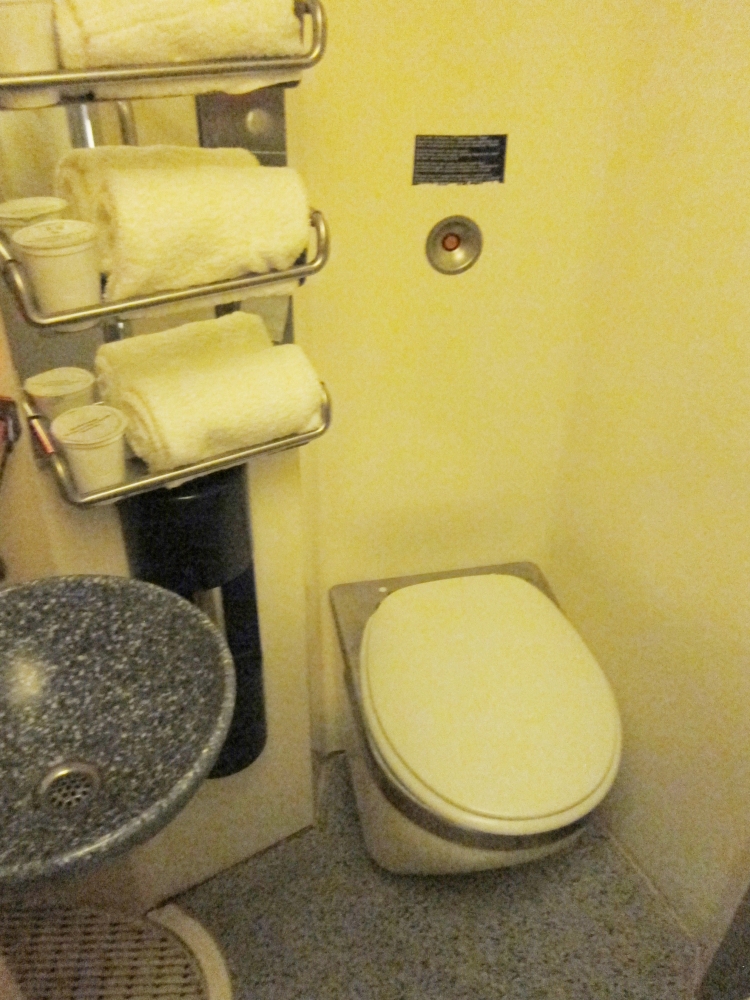 The trip was fairly uneventful – however to say there was anything ROMANTIC about the experience would be, well a LIE!!!  All jokes aside it was all pretty smooth for the most part.  The constant rocking of the train took a little getting used to and it wasn’t a deep restful sleep but more dozing and trying to get comfy.  At one point I realised we had stopped and I wasn’t sure what that was all about.  (Update:- later the next day our tour guide said Oh yes that is the train they call the “Robbery Train” because it stops at Verona for an hour.  As the story goes the thieves jump onto the train and go into any unlocked cabins to see what they can find while people are asleep.  I’d like to think I wouldn’t sleep that soundly but you just don’t know I guess after a few bevvies.  Fortunately for us we locked our cabin so those poor souls missed out on an abundant stash of maltesers, every bandaid known to man and smelly socks.  A true and genuine shame indeed.)

For all my bitching and moaning the whole thing really wasn’t that bad and it did save us time and perhaps a little money.  Would I do an overnight train again? – hmmm yes if I absolutely had to but to be honest it left us feeling very tired for the whole next day of our arrival into Munich.  I would say it resembled a bit of jetlag and I did feel myself rocking for many hours after we got off.  It does the job and the cabin was very clean and well put together for our needs but I will try my hardest to find other options in the future.

We arrived into the station at around 6.30am bleary eyed but ready to take on our first day in Munich.  I leapt off that damn train though and broke into a full High School Musical choreographed number because DAMMIT – THAT’S THE LAST TRAIN SO ESSENTIALLY HUSBAND HAS RECEIVED THE ANTIDOTE TO HIS DISEASE OF ‘TRAIN BRAIN INSANE’.

~FYI – I will be starting up a charity for future trips because TBI is serious and it is important to fundraise for a cure.  Please donate to save my sanity….we accept money or wine!~

Oh and it was Easter Sunday when we hit Munich so Happy Easter to US!!!  See the next post for our German Adventures……..look out!!!!!

BOOKING TRAINS – Now don’t be alarmed but I’m going to share a rare piece of actual travel advice here as this was the final train ride on our adventure.  In the planning of this trip I came across a wonderful resource called The Man in Seat 61.  It is an incredible magical place full of everything you need to book a train in Europe – and pretty much anywhere.  It has pictures of each “class of cabin”, it tells you approx. costs, when the tickets can be purchased and absolutely everything you could need to know.  You do not buy the tickets on his website, he just includes the information and links to all of the different ticket sellers.  I was so impressed with the detailed information and how easy his website made things.  Then I came to booking my overnight train cabin and I was having a bit of trouble with booking the tickets on the Italian rail website.  On a whim I emailed The Man in Seat 61 never really imagining he would reply but I was getting frustrated with where I was going wrong.  I am not kidding, he responded to me in under 24 hours in great detail and I ended up seeing where I was going wrong and was able to purchase the tickets.  I could not be more impressed with this amazing FREE resource so if you are booking a trip any where please go there.  It’s AMAZEBALLS!!!  I’ve just used it to work out some train tickets for our upcoming trip in China and it was super helpful AGAIN!!!!  Get there – do yourself a favour – enjoy – you are welcome!!!!

The Kellys on Tour

The Kellys on Tour